My fashion blog SpyGirl caused this to happen:
I didn't fully explain WHY the mad hunt for yellow garments/fabrics on SpyGirl caused such chaos. It became one of those moments in decluttering when enough space was opened up in an area to then begin going deeper and it created a BIG MESS. The fabrics in the foreground came off the dining room sewing table because I was hoping the yellow/black/red plaids (left side of couch) were under them. ALL of this is sewing and/or repurposing/sewing projects. Some don't require completing any more!

At first I had a grand overview of everything yellow in my to-do boxes.
I then began to group things, using methods learned from Katie.

Some rank as keepsakes. They are going into a special box. 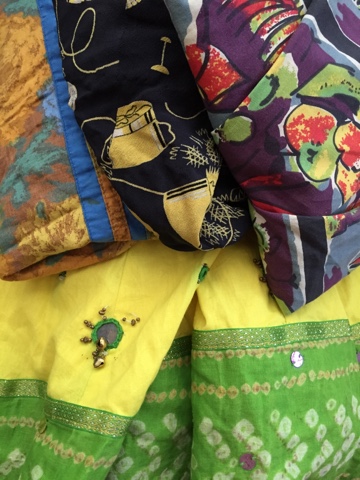 Some, I'm still attracted to in terms of color and pattern.
They will return to the to-do box. 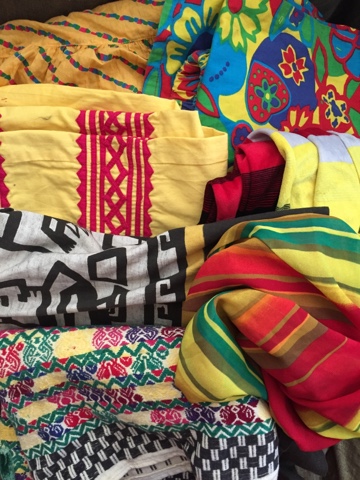 And some I culled, going into the sell/to donate area.

Happiest find of the day was my "power apron", a bedraggled paint-laden denim shirt that I use for painting. I bought it in Hong Kong in 1992. It had been missing for a couple of years. 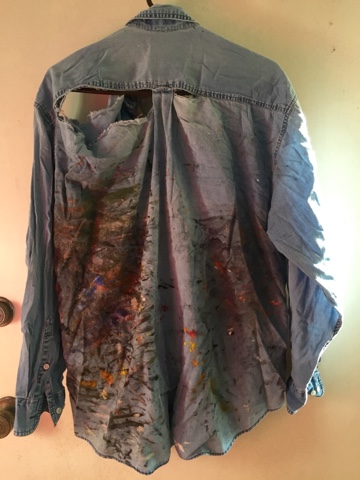 Find links to all the posts (as they get written) here.
Posted by Anne M Bray at 6:00 AM

Travels. Eating. Recipes. Obsessions. Fasten your seatbelt and tuck in your napkin

I'm a glutton with the blogs too

Recent reviews by anne m b.
What's this?